Rusty Air Conditioner? What It Means 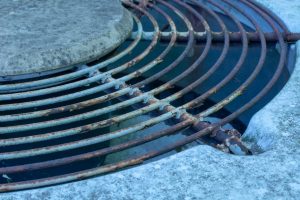 If a rusty air conditioner is becoming an eyesore outside your house, should you be concerned? The outside component of your central air conditioner is exposed to the elements 24/7/365. One ultimate consequence of this is possible appearance of rust on the outdoor condenser unit. Initially, this may seem like merely an aesthetic matter. However, rusting also brings up other issues that need to be considered.

Overall Age of the Unit

Central air conditioners are designed and built to withstand outdoor exposure for a period of years equivalent to the expected service life of the unit. If you’re noticing rust or other deterioration appearing on outdoor components, first consider these facts:

Rust visible on the outside of a central A/C may be only the beginning of the story. The corrosion process may also be affecting critical components inside the unit like the condenser coil. Coil corrosion commonly triggers refrigerant leakage, initiating a variety of system-wide symptoms include poor cooling performance, higher operating costs and potential damage to expensive components like the system compressor. While a new coat of paint may seem like a cost-effective remedy to external rust, remember that the aging unit may also be affected by expensive internal coil corrosion you can’t see.

For more about the potential significance of a rusty air conditioner, ask the professionals at Mowery Heating, Cooling and Plumbing.

Hours:
Monday-Friday
8 am to 7 pm
Saturday
8 am to 5 pm
Sunday
Closed